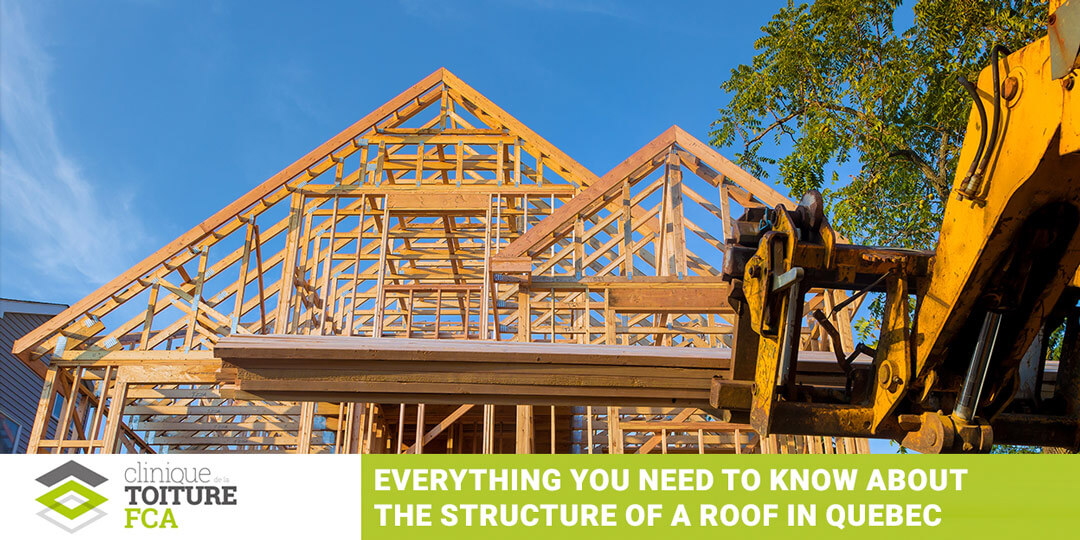 What is the structure of a roof and what is it for? Knowing the different components of a roof allows you to better detect and understand any problems that may arise. What’s more, if you have to deal with professionals, you will be able to ask them better questions and understand the work they are doing.

Clinique de la toiture FCA provides an overview of the components that make up the structure of your roof.

What are the components of a roof?

When you look at a roof, the first thing you notice is the covering, the visible part. Designed from different materials depending on the type of roofing, the covering is attached to the roofing support, called the roof deck.

Between the decking and the coating, there are sometimes protective layers, called underlayment, which further protect the structure from water infiltration.

On the surface you will also find roof flashings, usually metal sheets, which prevent water from seeping into the house. They are designed to protect certain areas such as chimneys, skylights, vents, etc.

Let’s go over the edge of the roof, which is made up of several elements that provide protection for the roof and walls of the house, especially against rain damage. Roof battens are attached to the eaves edge to direct water to the gutter. The gutter is connected to a downspout that drains the water away from the foundation of the house. The soffit, in turn, is designed to ventilate the attic.

The last component of a roof, which we can’t see, is the frame. This is the entire structure that supports the roof and gives it its shape. It also includes the decking, which is the set of plywood sheets to which the covering is nailed.

What is the structure of a roof?

When we talk about the structure of a roof, we are talking about its frame. It is made up of several components that trace the shape of the roof and on which we install every layer of the roof, from the decking to the coverings.

The roof truss is one these components. They come in many shapes (standard, barn, cathedral, flat, etc.), and most often make up most of the roof’s frame, on which the decking is placed. Rafters are also a popular choice for the frame.

There are many different roof structures: pitched roofs, flat roofs, terraced roofs, green roofs – which are increasingly popular – and designer roofs, among others. Designer roofs are uncommon, however, and require work between an architect and a structural engineer.

In the past, carpenters were responsible for the entire construction of the roof structure, but today the manufacturing process has been largely computerized and is carried out in a factory. Carpenters are still responsible for assembling the structure; it is then the roofers who install the remaining components of the roof.

Role of the roof structure

As you know, the roof is essential to protect the interior of a building and the people who live there. The roof structure must be solid and resistant to bad weather. It also supports the other elements of the roof, in particular the decking and the coverings.

Attics are another important component of a roof structure: this empty space left by the structure is a crucial element for ventilation and insulation. It allows us to regulate the temperature of the house and to prevent damage caused by humidity.

Leave us your email address and we will contact you as soon as possible to assess your needs!

Leave us your email address and we will contact you as soon as possible to assess your needs!